He is talking about football and a unique German club famed for its fight against fascism.

Brux has spent 29 years working at FC St Pauli, an iconic football team based in Hamburg whose fans are renowned for left-wing politics and support for refugees.

Priding itself on having the largest proportion of female fans in German football, the club removed advertising by lads’ mag, Maxim, from within its grounds following protests from fans over the sexist portrayal of women.

The club also hosted the FIFI Wild Cup, a one-off competition made up of teams like Tibet and Zanzibar, not recognised by FIFA, with the Turkish Republic of Northern Cyprus taking home the prize.

St Pauli’s stance against neo-nazism, homophobia and intolerance generally, has grown its reputation internationally in recent years, spawning more than 50 fan clubs across the world who embrace its politics and ethos of tolerance and respect.

Synonymous with the Totenkopf (skull and crossbones), the team is in Bundesliga 2 (Germany’s second division) and even loyal fans say it’s mediocre, although the team has played well so far this season (currently 4th).

But many supporters say its home, the 32,000-capacity Millerntor Stadium has one of the most absorbing atmospheres anywhere in Europe.

Pre-match rituals include fans marching en masse to the ground and the team walking onto the pitch to the sound of rock band AC/DC’s clanging anthem, Hells Bells.

The St Pauli fans’ opposition to fascism is made clear. They embrace the slogan, Gegen Rechts (fight the right) and many fans wear t-shirts depicting a fist smashing a swastika.

Brux, who has been working at the club since 1989, explained how St Pauli – known as the “boys in brown” – underwent a transformation around 30 years ago when anarchist squatters began attending home games. 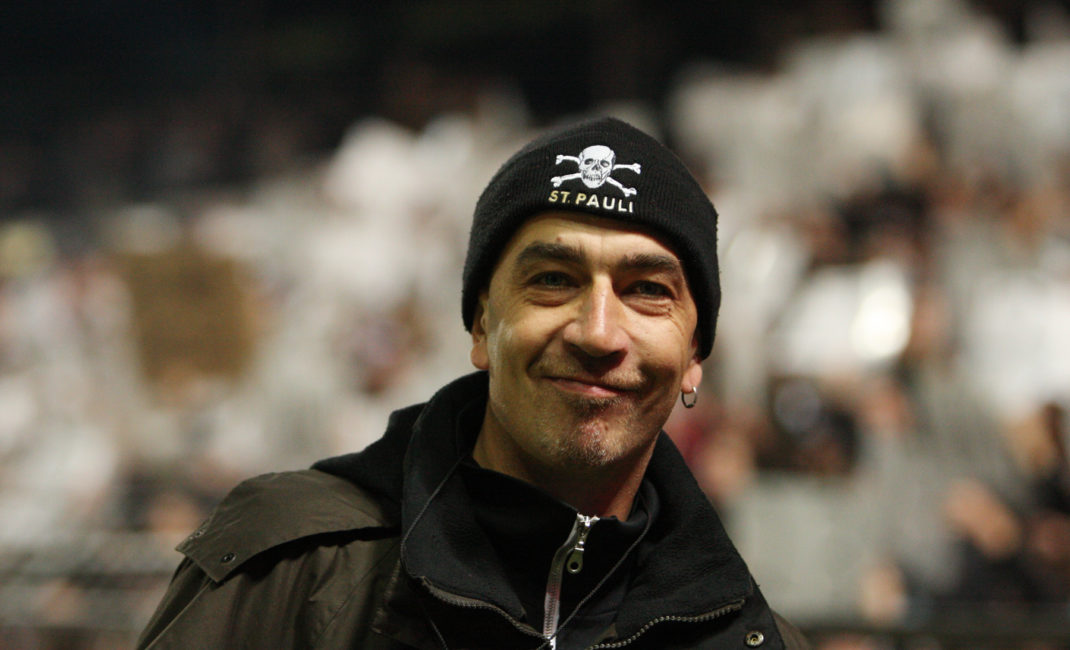 Sven Brux has worked at St Pauli FC for 29 years.

“It was in the 1980s when more and more alternative people, left wing types and squatters moved to the St Pauli area.

“They said, ‘let’s go to football’ and they decided to act inside the stadium as they did outside, so they did not accept any racism or right wing hooliganism.

“It was this generation that started the opposition to fascism.”

During the 80s and 90s, right wing hooliganism linked to neo-nazism was threatening football right across Europe, but St Pauli fans took a stance then which has arguably developed into the club’s raison d’etre.

They became the first team in Germany to officially ban right-wing nationalist activities and displays within the grounds.

To this day, there are no openly right wing or fascist groups to be found on the terraces at Millerntor Stadium, in stark contrast to other German clubs who have suffered problems with neo-nazis including bitter city rivals Hamburger SV.

This anti-fascist stance feels particularly pertinent at a time when Germany’s old east-west split is resurfacing, with racist rioting in the streets of Chemnitz and Germany’s far-right Alternative fur Deutschland (AfD) party fanning the flames.

In direct opposition, St Pauli’s fan clubs run a series of pro-active and progressive social projects including multicultural football for youngsters and support for refugees arriving in Hamburg from conflict zones such as Syria and Afghanistan.

At the height of the so-called refugee crisis, the club welcomed newcomers to sleep inside the stadium after they arrived in the middle of the night. 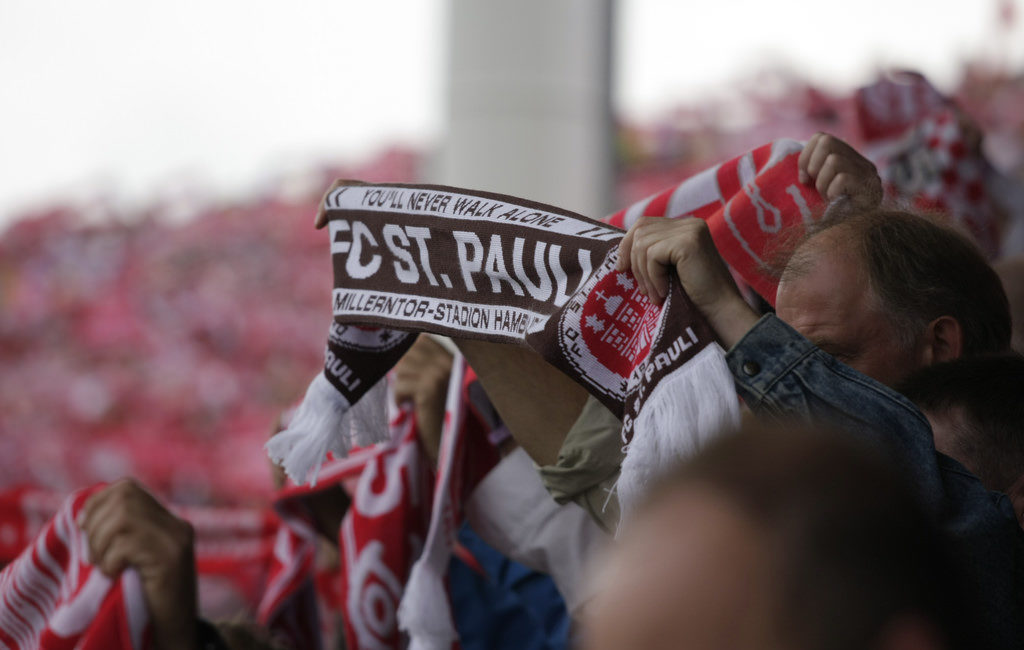 Abroad, there are at least 50 international fan clubs including Yorkshire St Pauli in England, one of the largest, with around 130 members.

They meet in Leeds to watch matches and organise trips to Hamburg and offer football sessions to asylum seekers and refugees.

“We put on the matches in local bars and run Football for All, which is about providing a space for asylum seekers and refugees,” says Webster who visited Hamburg six times last season to watch his team.

“There is so much happening around the club, that it’s not just about football,” Webster adds, explaining that opposition to racism is a major attraction and that Yorkshire St Pauli has been proactive in opposing the far right in England, where football fans have been prominent in the rise of two extreme nationalist groups, the English Defence League and the Football Lads’ Alliance, who’ve both been involved in street violence.

Webster says resistance to the far right has been growing and club members took to the streets recently to support a counter protest organised by the Anti-Fascist Network, against a right wing outfit called Yorkshire Patriots.

“The fan club recognises we have a role to play in this, rather than just saying, ‘we are anti-racist’.

“We need to act on that philosophy and not just hold it up as a label,” he says.

His sentiments are shared in Scotland where Glasgow St Pauli fans, inspired by the “No Football for Fascists” sign painted across the stands in Hamburg, sport the slogan “Nae Fitbaw for Fascists” on T-shirts.

In July, a new anti-fascist football group was formed in the UK. Following the transition of the Democratic Football Lads Alliance into a right-wing group backing former English Defence League leader, Stephen Yaxley-Lennon (Tommy Robinson), the new Football Lads and Lasses Against Fascism (FLAF) was started by fans who were fed up with racism.

With the mission statement: “for working class unity against fascism,” the group has more than 12,000 followers on Facebook, suggesting a growing anti-racist movement among UK football fans. 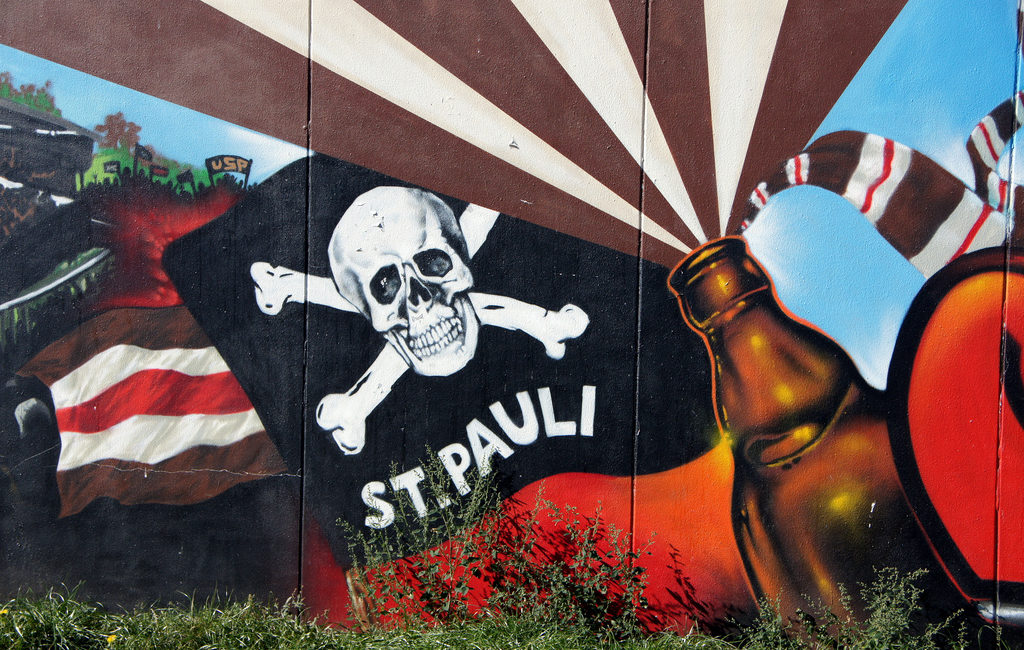 In the US there is more St Pauli inspired activism, in both New York City and Buffalo. As one of the newest fan clubs, FC St Pauli Buffalo is celebrating its first anniversary this month.

Founder Ernie Thalhamer says a main aim is to fight “rampant racism” and to support the 15,000 refugees living in the Buffalo area, people who’ve fled war in places such as Iraq and the Democratic Republic of Congo.

Likewise, a fan club established in New York City says that supporting marginalised people is fundamental to its members.

FC St Pauli Fans New York City (aka The East River Pirates) was formed in 2008 and for member Shawn Roggencamp, the political culture of St Pauli is as important as the football.

The club has raised money for the Immigrant Defense Project, which does national advocacy work for immigrants’ rights, and it has links to activists who organised anti-fascist demonstrations in Charlottesville last year, when Heather Heyer was killed during violent protests by neo-nazis. The club later raised money for people who were injured in the attack.“Our group is half American, half German, some from Hamburg,“ says Roggenkamp. “Some Germans were not even St Pauli fans but they joined us for the social aspect because they believed in the politics, and they were interested in the community. It doesn’t really matter if your first team is St Pauli, as long as you’re being a good person.”
FIRST PUBLISHED : November 23rd 2018 By Lacuna Magazine